​The NBC was out on the Bay twice this week. First, on Tuesday, October 6th, the crew was out servicing the Bullock's Reach buoy. The sondes were swapped out with freshly calibrated sondes.  Sara captained the boat while monitoring professionals Mike and Daryll serviced the buoy. It was a beautiful sunny day with no wind and calm waters. On Wednesday, October 7th, a crew was collecting nutrients samples, taking Secchi Disk and Par sensor water clarity measurements, conducting water column profiles using the Seabird instrument, and conducting real-time surface mapping of water quality parameters, including dissolved oxygen, chlorophyll, water temperature, salinity, and pH, all in an effort to document water quality improvements associated with NBC construction projects.  Sara captained the boat again while monitoring professionals Jeff and Daryll collected the samples and data.  It was a partly cloudy day with a moderate wind out of the southwest and a chop on the water. A photo of a cargo ship at ProvPort was taken this day. Please note: the results of NBC's fecal coliform and enterococci monitoring are for informational/research purposes only and are not to intended to suggest official state compliance with bathing or shellfishing standards.

Water quality was good this week at Phillipsdale Landing. Sondes were changed out for routine maintenance on September 29. Over the course of the week, 0.63 inches of rainfall was recorded, with the majority of this rainfall (0.54 in) occurring on September 30. Decreases in both surface and bottom salinity occurred following this mid-week rain event, driven by increased Blackstone River flows. Salinity averaged 21.2 ppt in surface waters and ranged from 12.2 ppt to 26.6 ppt. Bottom salinity averaged 25.2 ppt and ranged from 14.9 ppt to 28.9 ppt. Surface and bottom water temperatures averaged 20.9°C and 20.6°C, respectively. Surface temperatures ranged from 17.9°C to 22.2°C, while bottom temperatures ranged from 19.6°C to 22.1°C.

​Data were collected on October 1, 2020 while the R/V Monitor was underway collecting bacteria samples and performing vertical profiles in the Providence and Seekonk River estuaries. The chlorophyll concentrations were poor to good in the areas surveyed with a north-south gradient. From north to south, average chlorophyll concentrations were as follows: Seekonk River (24.80 µg/L), Upper Providence River (12.16 µg/L), Edgewood Shoals area (12.96 µg/L), Pawtuxet River area (7.30 µg/L), and Lower Providence River area (3.34 µg/L). Overall, chlorophyll ranged between 0.60 µg/L and 57.60 µg/L with an overall average of 11.95 µg/L.  The chlorophyll data from this date are presented in the map below: 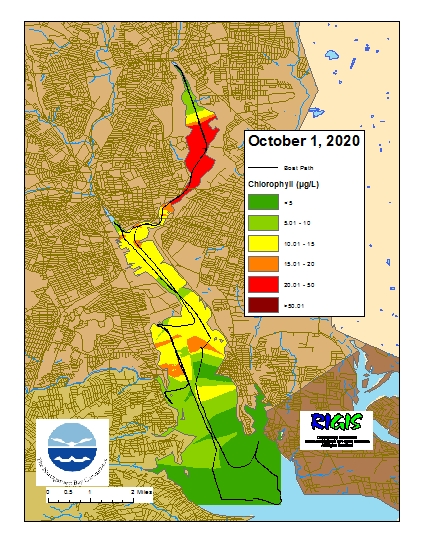