​Water clarity was measured at six locations in the Providence River on November 20, 2019. Approximately 0.25 inches of rainfall occurred over the two days prior to the survey, and light rain continued to fall on the survey day itself. The average Secchi depth decreased since the last survey on November 6, from 2.9 m to 2.4 m. Almost all sites exhibited decreased clarity since the previous survey, with the greatest decrease (down 1.0 m) observed at Edgewood Yacht Club. Only one site exhibited increased clarity, India Point Park, up 0.8 m. Water clarity ranged from 1.7 m at Pawtuxet Cove to 2.7 m at India Point Park, Bullock Reach, and Conimicut Point. There was no evidence for a clarity gradient from north to south this week. ​

​Water clarity was measured at eight locations in the Providence and Seekonk Rivers on November 6, 2019. Approximately 0.49 inches of rainfall occurred the day prior to the survey. The average Secchi depth decreased since the last survey on October 24, from 3.3 m to 2.9 m. Three sites exhibited decreased clarity since the previous survey, with the greatest decrease (down 1.3 m) observed at Conimicut Point. Two sites exhibited increased clarity, the greatest of which was seen at Pomham Rocks (up 0.4 m). The remaining sites exhibited unchanged clarity or had not been surveyed recently. Water clarity ranged from 1.5 m at Phillipsdale Landing to 3.9 m at Edgewood Shoal. While the Seekonk River sites exhibited the lowest clarity this week, the overall north to south gradient in increasing clarity was weak, with variable clarity throughout the Providence River. ​

Due to remote data transfer issues, there are no current Bullock Reach data available for this week.  The data are being internally logged by the sondes, and will be updated to the blog as they become available. 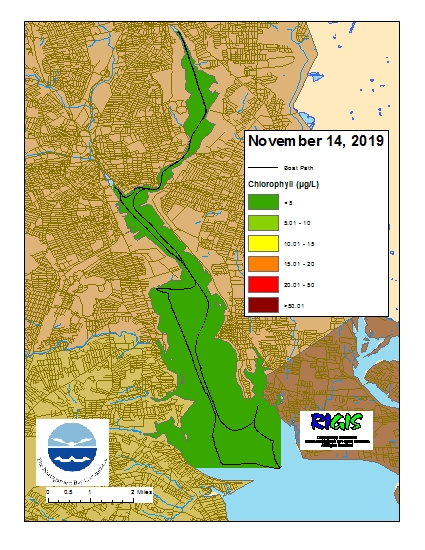 ​On Thursday, November 14th, the crew of the R/V Monitor was out on the upper Bay collecting bacteria samples, taking Secchi Disk water clarity measurements, and conducting real-time surface mapping of water quality parameters, including dissolved oxygen, chlorophyll, water temperature, salinity, and pH, all in an effort to document water quality improvements associated with NBC construction projects.  Water column profiles and Par measurements were not done this day, as the equipment is being calibrated.  Sara captained the boat while monitoring professionals Steve and Amanda collected the samples and data.  It was a cold and cloudy day with no wind and glass-like waters.  Today's photo features a US Coast Guard vessel observed on the Bay. 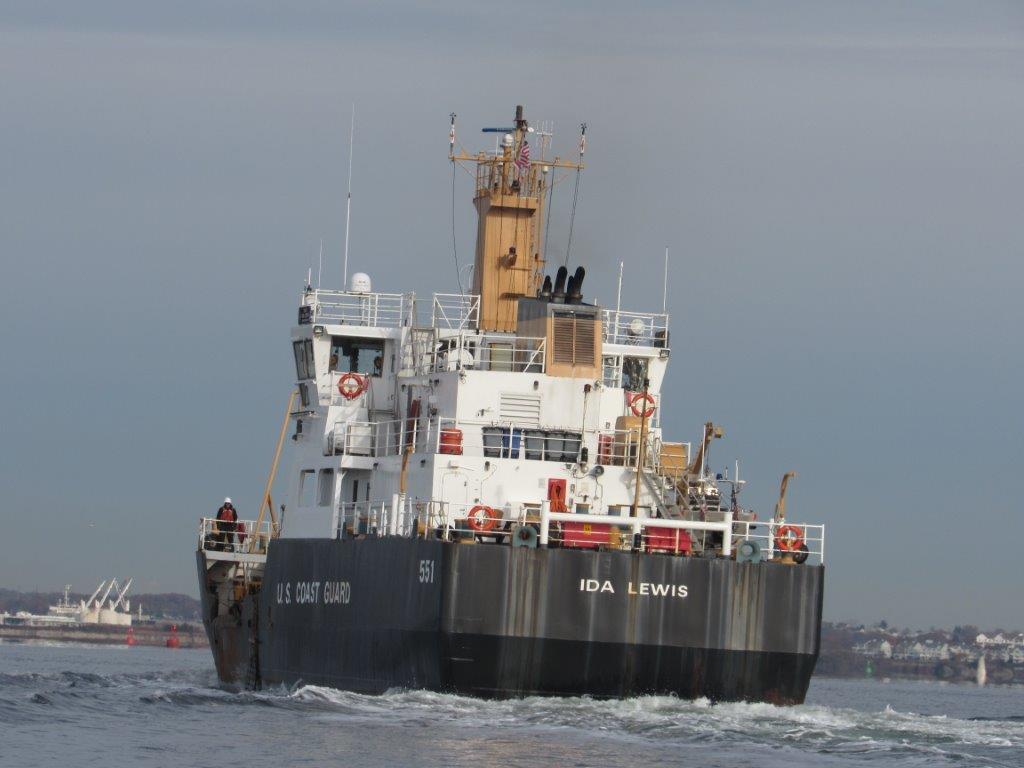