Phillipsdale Landing
Phillipsdale Landing sondes were deployed for the start of the 2021 monitoring season on March 3. Water quality at this site was good this week. Moderate rain events on February 27-28 (0.69 inches) and March 1 (0.34 inches) preceded sonde deployment, though the rest of the week was dry (NOAA TF Green data).  Blackstone River flows were declining over the course of the week. This week, salinity at the surface averaged 6.2 ppt and ranged from 2.6 ppt to 10.7 ppt. Bottom salinity averaged 17.6 ppt and ranged from 3.5 ppt to 27.5 ppt. Surface and bottom water temperatures remain cold, averaging 3.1°C and 3.2°C, respectively. Surface temperatures ranged from 1.5°C to 4.9°C, while bottom temperatures ranged from 2.3°C to 4.3°C.
​
Dissolved oxygen (DO) was high at both depths, typical for this time of year, and well above the hypoxia threshold (2.9 mg/L). Surface DO averaged 13.0 mg/L, with a minimum of 12.4 mg/L, and bottom DO averaged 11.4 mg/L, with a minimum of 10.2 mg/L. Chlorophyll concentrations were low, averaging 2.9 ug/L at the surface and 5.3 ug/L at the bottom. Maximum surface chlorophyll concentrations reached 9.2 ug/L, measured on March 6. Please note that tidal fluctuations and Blackstone River flow greatly influence water column salinity, temperature, and dissolved oxygen at this location.
Bullock Reach
Bullock Reach sondes are expected to be deployed in May 2021.
Week of March 28 - April 3, 2021

​On March 31, twenty stations were sampled for fecal coliform bacteria in the Providence and Seekonk Rivers. Five  of these stations were also sampled for enterococci bacteria. Precipitation in the five days prior to sampling totaled 1.53 inches, with a majority of the rainfall (1.47 inches) occurring on March 28.

Please note: the results of NBC's fecal coliform and enterococci monitoring are for informational/research purposes only and are not to intended to suggest official state compliance with bathing or shellfishing standards.

​Water clarity was measured at four locations in the Providence River on February 24, 2021; the survey day was cut short due to mechanical problems on the boat. Moderate rainfall totaling 0.81 inches was recorded in the area over the five days prior to the survey, and snowmelt also occurred over that time. Overall, Secchi depth averaged 4.04 meters, compared to 3.13 meters on January 13, 2021. The lowest clarity (3.63 meters) was measured at Bullock Reach, while the greatest clarity (4.25 meters) was measured at Pomham Rocks. Generally, water clarity was higher at the northernmost sites (Pomham Rocks and Edgewood Yacht Club) than the southern sites (Bullock Reach and Conimicut Point) this week.  ​

Water column profiles were measured at seven locations in the Providence and Seekonk Rivers using the Seabird profiling instrument on January 13, 2021. The five days leading up to the survey were dry, with no recorded precipitation.
Surface salinities among the sites surveyed ranged from 17 psu at India Point Park to 26 psu at Pomham Rocks and Bullock Reach. Bottom salinities ranged from 28 psu at India Point Park to 29.8 psu at Conimicut Point. Surface water temperatures ranged from 4°C at Conimicut Point to 6°C at most of the remaining sites. Bottom temperatures ranged from 6°C at most sites to 7°C at Edgewood Yacht Club and Edgewood Shoal.
Dissolved oxygen (DO) ranged from a minimum of 8.4 mg/L near the bottom at Edgewood Yacht Club to 10.9 mg/L in surface waters at India Point Park. Hypoxic conditions (e.g., DO concentrations <2.9 mg/L) were not observed at any of the sites. Please note that due to a quality control issue, numerical fluorescence data are not posted at this time.
Note – the deepest data from the Edgewood Yacht Club (4.25 m) and Edgewood Shoal (5 m) profiles are anomalous and may have been impacted by sediment or other interference at the bay floor. These results have been excluded from the discussion above.
Week of March 28 - April 3, 2021

​On Wednesday, March 31st, the crew of the R/V Monitor was out on the upper Bay collecting bacteria samples, taking Secchi Disk and Par sensor water clarity measurements, and conducting real-time surface mapping of water quality parameters, including dissolved oxygen, chlorophyll, water temperature, salinity, and pH, all in an effort to document water quality improvements associated with NBC construction projects. The crew conducted side by side profile tests using the new YSI EXO2 sonde and the YSI 6 Series sonde.  Sara captained the boat while monitoring professionals Daryll, Justin, and Rebecca collected the samples and data.  It was a cloudy day with a southwest wind and a slight chop on the water.  The photo taken this day was of the Conimicut lighthouse. 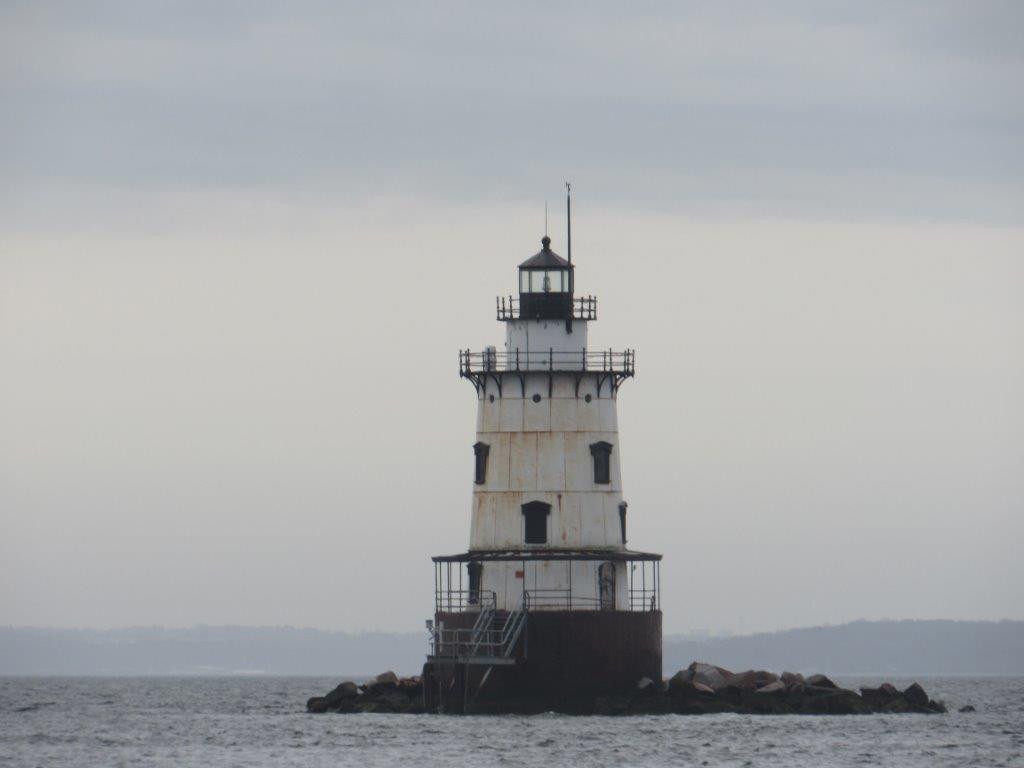