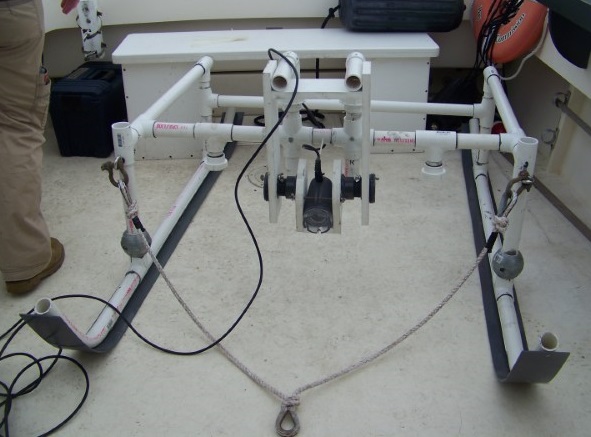 In 2014, the NBC began conducting video surveys of the benthic (bottom) conditions in the Providence River in order to make observations of potential changes in the environment as various water quality improvement initiatives take place in the Narragansett Bay watershed. During these surveys the NBC’s boat, the R/V Monitor, tows an underwater camera mounted on a specialized sled that slides over the bottom collecting the video and recording position via GPS. Currently, these surveys are conducted along three transects within the Bay as shown on the maps below. NBC field personnel attempt to conduct these surveys once per month, but are at the mercy of the weather, as particular tide conditions, strong sunshine, and light winds are required for best video quality.

Each transect survey results in approximately one hour of video footage, which is reviewed back at the NBC office. Although each video is typically one hour long, they must be reviewed at reduced play-back speed to catch all the detail and fast-moving organisms, and thus these reviews can become very time intensive. As in many other ecological video surveys, NBC scientists subsample the video for particular observations to enable them to generate usable data quickly. First, in sixty-second intervals, a freeze-frame image is characterized for “Bottom Type”, which is typically any combination of mudflats, amphipod tube mats, algae, or shell hash (e.g., data map at left, below). Next, a sixty-second clip of video is reviewed every five minutes to generate an approximate count of benthic organisms or benthic habitat structures (e.g., data map at right, below). These observations can then be overlaid on a map to look for spatial patterns. Finally, as time permits, NBC scientists review the entire video in detail, recording rare observations and organisms that may have been missed in the video subsampling. 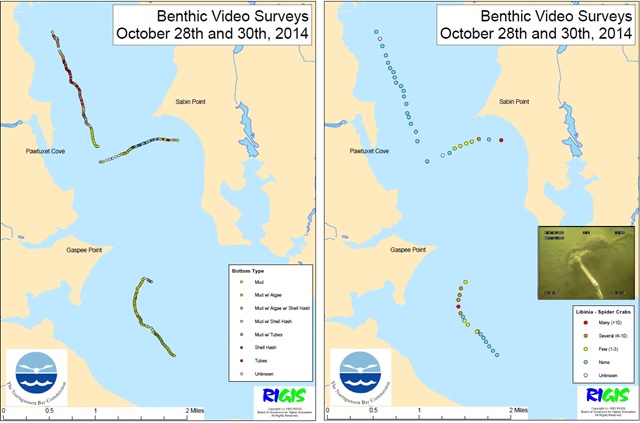 The observations the NBC makes in these benthic video surveys represent snapshots in time of small areas within the upper Bay benthic ecosystem. While we can’t tell from these videos whether the ecosystem and benthic community is in “good” or “bad” condition, over time we hope to document changes in the presence and abundance of various species, in order to better interpret the effects of water quality changes to the Bay. These benthic organisms, including algae, invertebrates, and fish are important members of a complex ecosystem and food web, which impact the entire ecosystem of Narragansett Bay, including the fisheries and recreational activities enjoyed by people throughout Rhode Island.