Turbidity is a measure of water clarity - how much the material suspended in water decreases the passage of light through the water. Suspended materials can include soil particles (clay, silt, and sand), algae, plankton, microbes, and other substances. Higher turbidity in the water column can increase water temperatures because suspended particles can absorb more heat. With increased temperatures, dissolved oxygen concentrations can decrease since warm water holds less O2 than colder water. In addition, more suspended particles can reduce the amount of light available for photosynthesis by aquatic plants which in turn can also decrease oxygen levels in the water. Suspended materials can also affect aquatic organisms by clogging fish gills, affect egg and larval development, lower growth rates, and reduce disease resistance. Sources of suspended particles include: soil erosion, waste discharge, urban runoff, and excessive algal growth.

The NBC collects data about water clarity in several ways. The most common method for measuring water clarity is the Secchi Disk, a black and white disk that measures water clarity by visually measuring the depth to which light is able to penetrate. The Secchi Disk is lowered into the water just until the person observing it can no longer see it. It is then pulled up until it is just visible and the depth is recorded.

Other parameters that are measured that can be indicative of water clarity are photosynthetic active radiation (PAR), Total Suspended Solids* (TSS) and Turbidity as measured using water quality monitoring equipment. PAR measures irradiance--or the amount of sunlight or ambient light that diffuses through water compared to surface light and can be used to help determine the photic zone, where sufficient light can reach for photosynthesis. PAR data is collected using two sensors: one located on an instrument called a Profiling CTD which collects water quality information at various depths in the water column and one sensor located on top of the boat to collect ambient light information. 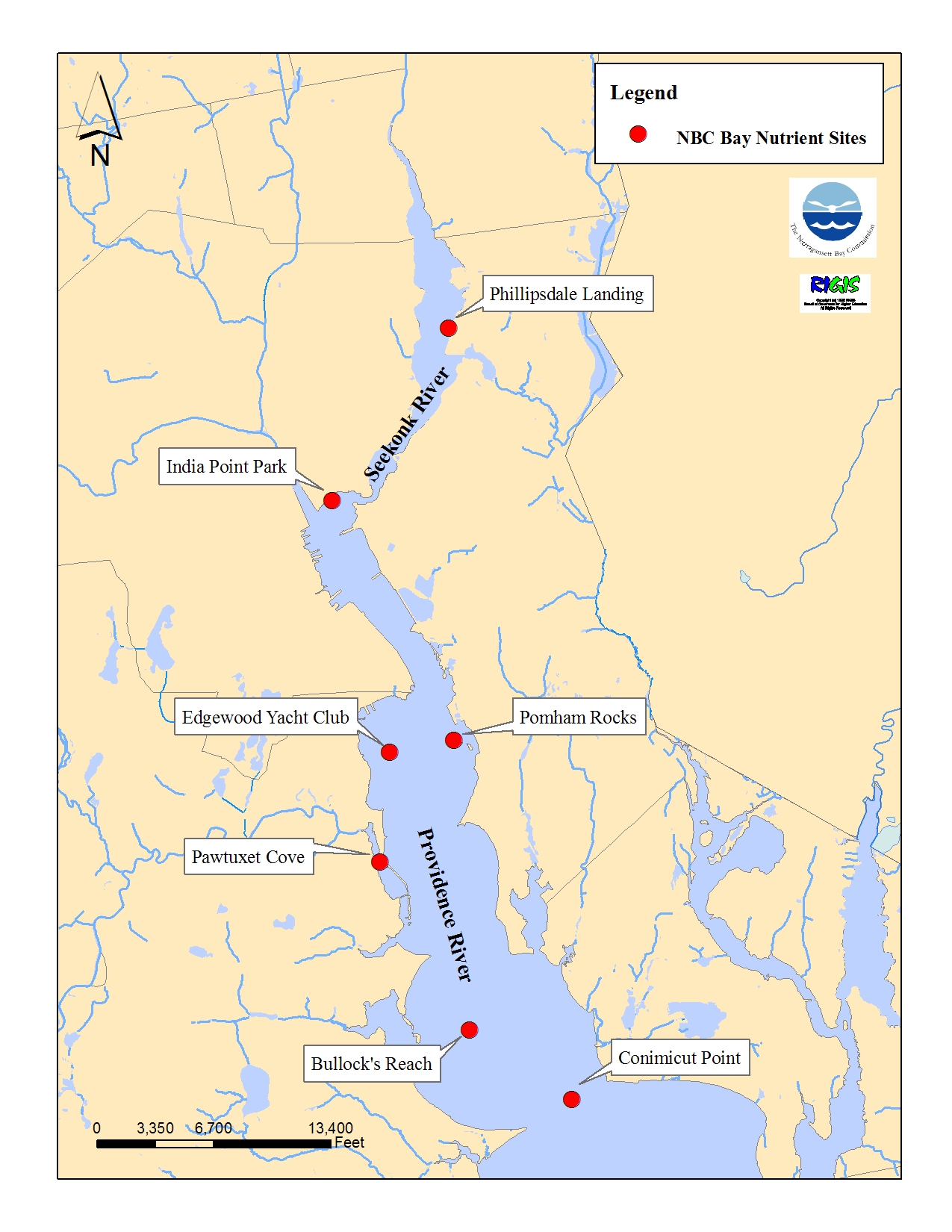 The amount of particles that are suspended in a sample of water is called total suspended solids* (TSS). The greater the amount of TSS that is measured in the water, the higher its turbidity and the lower its transparency (clarity). TSS samples are collected just below the surface of the water and are analyzed by the NBC laboratory. Turbidity can also be measured using turbidity sensors which measures water clarity at a particular depth in the water column. The NBC monitoring program uses all of these techniques to investigate water clarity.

*After a quality assurance/quality control review, the NBC found their TSS data was compromised.  The NBC is currently evaluating their TSS procedures.  Past TSS data, historically found on the nutrients monitoring page, has been removed from the website.  Once the issues are resolved, the NBC will resume TSS sampling and analysis and TSS data will be added to the website on the nutrients monitoring page.