​On Wednesday, September 28th, the crew of the R/V Monitor was out on the upper Bay collecting bacteria samples, taking Secchi Disk and Par sensor water clarity measurements, conducting water column profiles using the Seabird instrument, and conducting real-time surface mapping of water quality parameters, including dissolved oxygen, chlorophyll, water temperature, salinity, and pH, all in an effort to document water quality improvements associated with NBC construction projects. Sara captained the boat while monitoring professionals Steve, Jeffrey and Jeff collected the samples and data. It was sunny and cool with a light breeze and calm waters. Due to a faulty camera the featured photo of the I195 Iway bridge, showing Providence in the background, was taken from our archives. 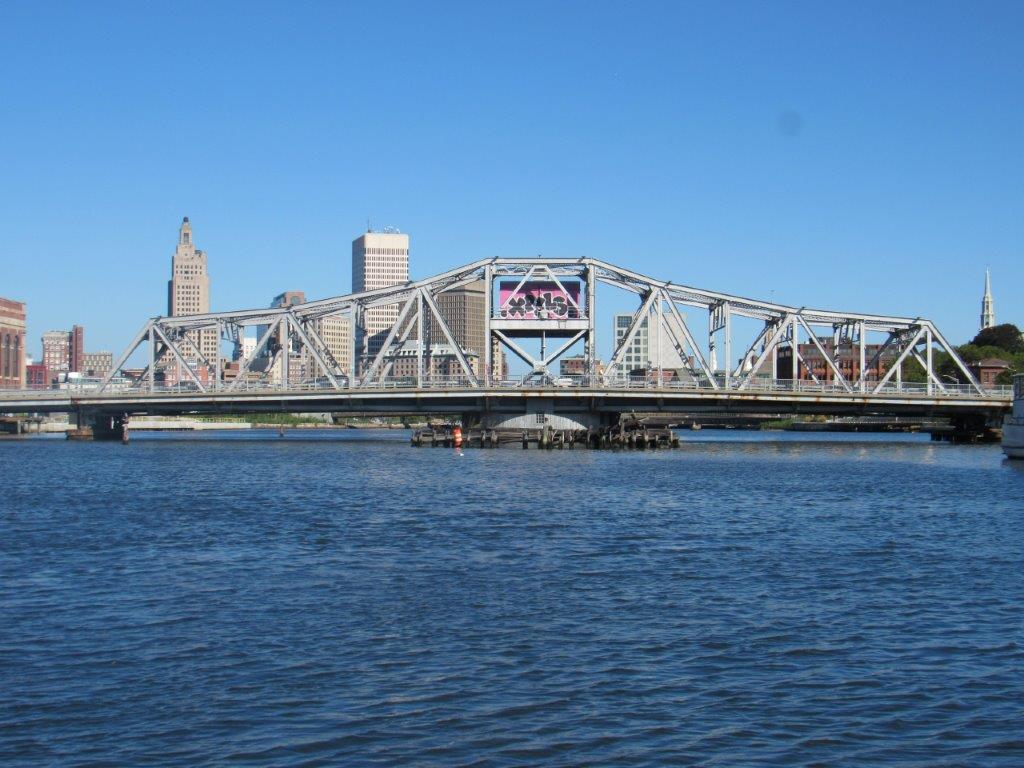 ​​Data were collected on September 28, 2022, while the R/V Monitor was underway collecting bacteria samples in the Providence and Seekonk River estuaries. The average chlorophyll concentrations were good in the areas surveyed. From north to south, average chlorophyll concentrations were as follows: Seekonk River (2.21 µg/L), Upper Providence River (2.85 µg/L), Edgewood Shoals area (4.61 µg/L), Pawtuxet River area (4.21 µg/L), and Lower Providence River (2.98 µg/L). Overall, chlorophyll ranged between 0.87 and 8.76 µg/L with an overall average of 3.18 µg/L. The chlorophyll data from this date are presented in the map below: 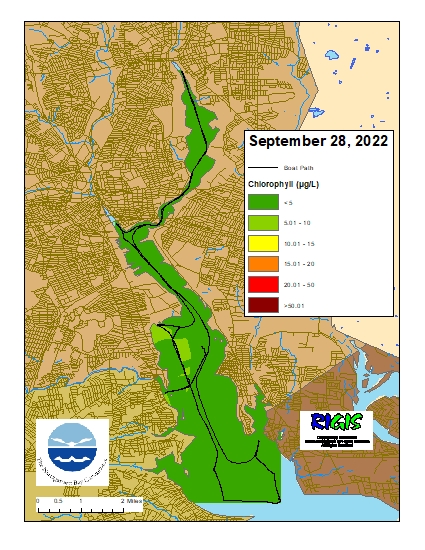 Water clarity was measured at eight locations in the Providence River and Seekonk River estuaries on September 21, 2022. Rainfall totaling 0.08 inches was recorded at TF Green in the five days prior to the survey. Secchi depth averaged 1.3 meters, compared to 2.4 meters on the previous survey (September 14). The lowest clarity this week (1.0 meters) was measured at India Point Park and Edgewood Shoal, while the greatest clarity (1.6 meters) was measured at Pomham Rocks, Conimicut Point, and Edgewood Yacht Club. There was no clear north-to-south gradient in water clarity among the sites this week. ​

​​Phytoplankton samples were collected on September 21, 2022 at Bullock Reach and analyzed in the laboratory shortly after collection. It was cool and cloudy on Narragansett Bay with some light rain. Sondes data revealed the surface water temperature was 21.22⁰C, salinity was 27.18 psu, and chlorophyll a was 15.96 ug/L. ​​The plankton tow net sample was filterable with a 20 micron mesh. The filtrate was a light tan color and had a quick filter time. The tow net sample was analyzed qualitatively for microorganisms using phase contrast microscopy. The whole water sample was analyzed quantitatively under 200x phase contrast microscopy. A Hensen Stempel pipette was used to accurately deliver 1ml of sample to a Sedge-wick Rafter chamber. This analysis revealed a total of 1,458,000 cells per Liter. The microflagellates were found at 1,140,000 cells/L. The most predominant phytoplankton genus was Leptocylindrus spp. at 160,000. Other representative genera include Chaetoceros spp. at 146,000 cells/L, Akashiwo sanguineum and pennate diatoms.​

200x phase contrast image of a ciliate and a pennate diatom​.​