On June 7, twenty stations were sampled for fecal coliform bacteria in the Providence and Seekonk Rivers.  Five of these stations were also sampled for enterococci bacteria. Precipitation in the five days prior to sampling totaled 0.55 inches as recorded at T.F. Green.
Overall, bacteria counts were lower this week than during the previous sampling event on May 25. The geometric mean of fecal coliform results for all sites was 17 MPN/100 mL, with the Seekonk River sites having higher counts than the Providence River sites (geometric means of 65 MPN/100 mL and 9 MPN/100 mL, respectively). The maximum count (930 MPN/100 mL) was measured at Division St. Dock in the Seekonk River.
Enterococci results had an overall geometric mean of 13 MPN/100 mL. Enterococci results ranged from non-detect at four sites (Phillipsdale Landing, South FP East, Gaspee Point, and Conimicut Point) to 63 MPN/100 mL at the Point St. Bridge site.
The table below lists the Rhode Island bacteria standards for primary contact and shellfishing established by the Rhode Island Department of Environmental Management (RIDEM). RIDEM defines primary contact as any recreational activities in which there is prolonged and intimate contact with water, involving considerable risk of water ingestion (e.g., swimming, diving, water skiing, and surfing). Please note that the RIDEM bacteria standards are provided here for informational purposes only and are not intended to indicate official state compliance with primary contact or shellfishing standards.
Summary of Rhode Island Bacteria Standards for Saltwater Primary Contact and Shellfishing
1Fecal coliform primary contact criteria app​lied only when adequate enterococci data are not available; 2Single sample maximum criterion for determining beach swimming advisories at designated beaches as evaluated by the Rhode Island Department of Health; 3For a three-tube decimal dilution
Table adapted from Rhode Island Water Quality Regulations (250-RICR-150-05-1)​; see regulations for complete details.
Week of June 12 - 18, 2022

Water clarity was measured at six locations in the Providence River estuary on June 15, 2022. Conditions leading up to the survey were wet, with 1.34 inches of precipitation recorded in the three days prior. Secchi depth averaged 1.4 meters, compared to 1.8 meters on the previous survey (June 7). The lowest clarity this w​eek (0.9 meters) was measured at Pawtuxet Cove, while the greatest clarity (2.0 meters) was measured at Bullock Reach. There was no clear north-to-south gradient in water clarity among the sites this week.

​On Wednesday, June 15th, the crew of the R/V Monitor was out on the upper Bay collecting nutrients and plankton samples, taking Secchi Disk water clarity measurements, conducting water column profiles using the Seabird instrument, and conducting real-time surface mapping of water quality parameters, including dissolved oxygen, chlorophyll, water temperature, salinity, and pH, all in an effort to document water quality improvements associated with NBC construction projects. Sara captained the boat while monitoring professionals Fern, Justin and Tyler collected the samples and data.  It was a warm and sunny day with a breeze from the northwest. There was a slight chop on the water this day. The featured photo is of the Providence-Newport ferry with the I-195 Iway bridge in the background. 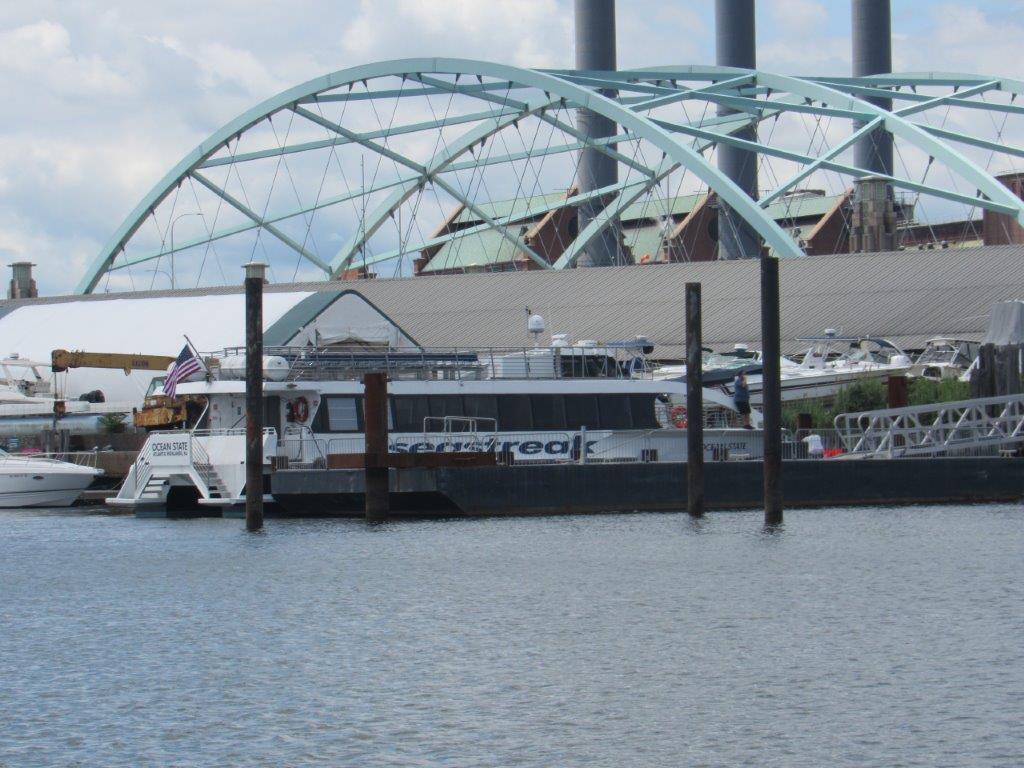 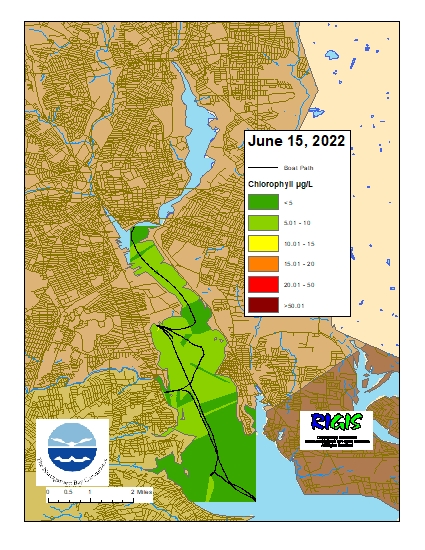