The Narragansett Bay Commission (NBC) began nutrient monitoring of local rivers and the Providence and Seekonk River estuaries in 2005, in order to document changes following the dramatic nutrient reduction efforts of wastewater treatment facilities throughout the watershed. While nutrients (e.g., nitrogen and phosphorus) are essential elements for primary production and ecosystem functioning, excess loadings of these elements can lead to water quality impairments. For example, excess nutrients can fuel large phytoplankton blooms, which subsequently decompose, leading to depletion of oxygen in estuarine waters. Such low oxygen conditions (e.g., hypoxia) impose significant stress on estuarine organisms, and can result in reduced reproductive capacity, smaller growth rates, and even mortality. A dramatic fish kill in Greenwich Bay in 2003 accelerated ​​plans within both Rhode Island and Massachusetts to reduce the nutrient loading to Narragansett Bay from wastewater treatment facilities (WWTFs) in the watershed, including those owned by the NBC (Field’s Point [FP] and Bucklin Point [BP]). By the summer of 2014, nutrient reduction improvements were online at both NBC facilities, and nitrogen discharging from these facilities during the May through October season had been reduced by more than 80% compared to 2003, the year of the major fish kill. The NBC’s long-term monitoring of nutrient concentrations in the local rivers and Bay allows researchers to identify sources and quantify loadings of nutrients to the upper Bay and provides essential data necessary to evaluate whether acceptable levels of nutrient reduction by wastewater treatment facilities have been achieved.

The NBC currently samples at river stations (see map below) one to two times per month. These sample locations were chosen to determine the amount of nutrient loading coming into the upper Bay from all major river sources. This includes rivers that enter the upper Bay from Massachusetts as well as those that enter within Rhode Island. Loading may be calculated based upon the nutrient concentrations measured in NBC samples and flow rates for each river provided by United States Geological Survey (USGS) flow gauges. 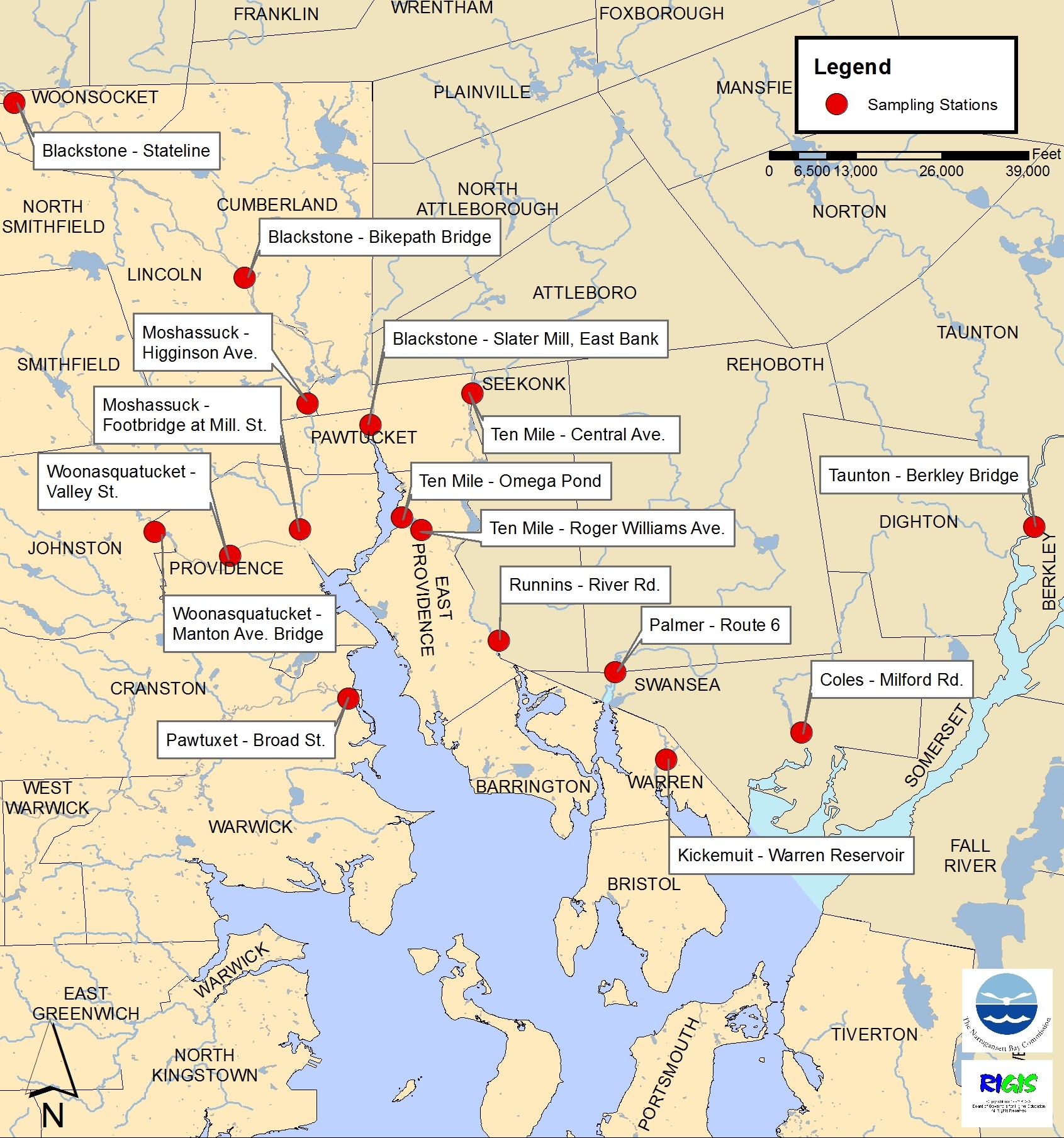 The NBC also samples eight bay stations (see map below) in the Providence and Seekonk River estuaries for nutrients. Samples are taken at the surface (i.e., 0.5-1 meter below the surface) twice per month and once per month at the bottom (i.e., approximately 0.5-1 meter above the sediment). These samples provide an important look at the concentrations of nutrients throughout the upper Bay region, which is impacted by many sources, including river loading, surrounding WWTFs, atmospheric deposition, sediments, groundwater, runoff, leaky septic systems, and nutrients coming from lower Bay and offshore sources with the tide. 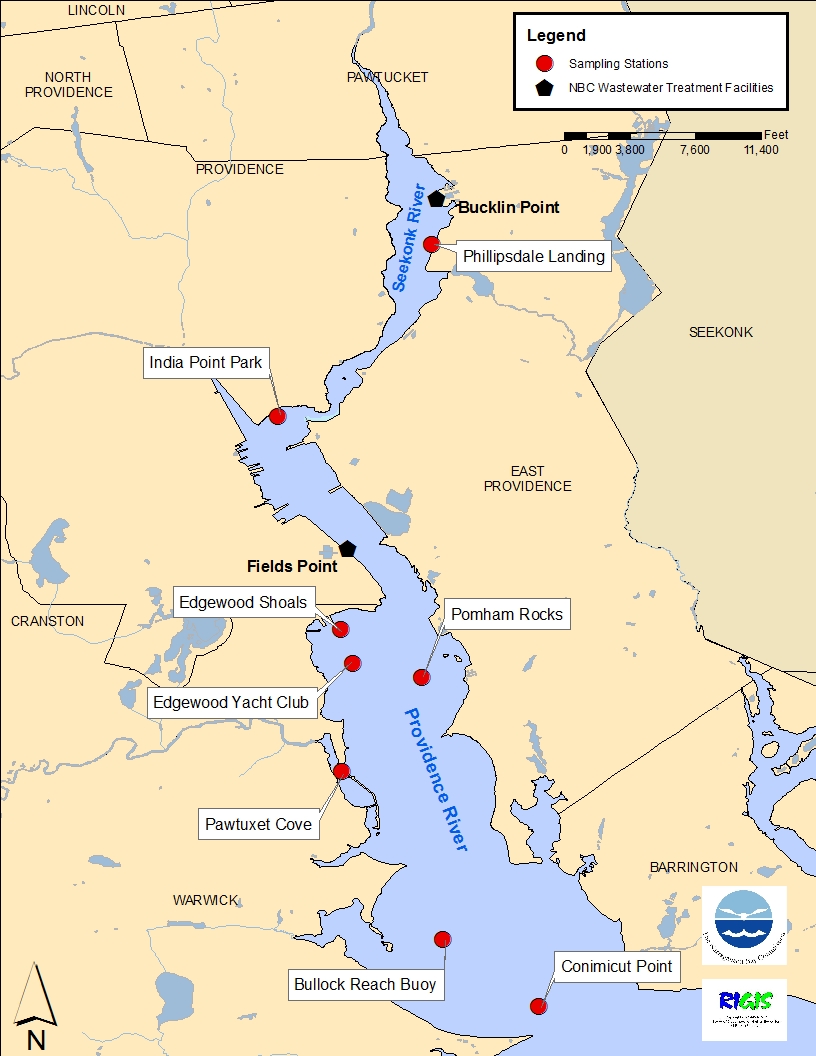 Samples are collected, filtered, and preserved at the sample station. Samples for nitrate+nitrite, nitrite, total dissolved nitrogen, ammonia, orthophosphate, and silicate are poured off and filtered through a 0.45 micrometer filter; a chemical preservative is added for ammonia, then all sample bottles are put on ice. Samples for total nitrogen and total suspended solids (TSS) are also poured off, but not filtered before being placed on ice. Lastly, a chlorophyll sample is filtered, preserved, and put on ice. All samples are analyzed by the NBC Laboratory.

NBC’s monitoring of river and Bay nutrients has produced a highly valuable, ongoing long-term dataset. These data have periodically been analyzed and presented by NBC staff at conferences and workshops. Posters and presentations from these events may be found on the Learn More page.

​By monitoring nutrient concentrations in the area rivers, the NBC scientists have been able to compare loading of nitrogen to the upper Bay from rivers (in pounds of total dissolved nitrogen [TDN]/day; total nitrogen was not sampled until July 2012) versus loading of nitrogen from the wastewater treatment facilities (in pounds of total nitrogen [TN]/day; NBC facilities and East Providence; see graph below). The Biological Nutrient Removal systems went fully online at the NBC facilities between 2013 and 2014, greatly reducing the relative load from these sources (red bars below). In recent years, these loadings have been minor compared to loadings from rivers, particularly during rain events. NBC monitors every other Wednesday, in all weather, capturing dry and wet weather conditions. Substantial spikes in nutrient loads are visible in the figure below due to wet weather.

NBC’s Bay nutrients monitoring results also illustrate a declining trend in nitrogen levels in the Bay, concurrent with nitrogen reductions at NBC facilities and other WWTFs throughout the watershed. In the figure below, dissolved inorganic nitrogen (DIN = nitrate + nitrite + ammonia) is compared to the US Environmental Protection Agency’s (EPA’s) National Coastal Conditions Report criteria for “good”, “fair”, and “poor” estuarine conditions. While there is variability year to year, there is an overall trend in decreasing DIN concentrations at these sites, concurrent with nitrogen reduction efforts. Note also, DIN concentrations track similarly to the rainfall totals during the season, which is expected given the increased loadings from river sources during wet weather. ​ 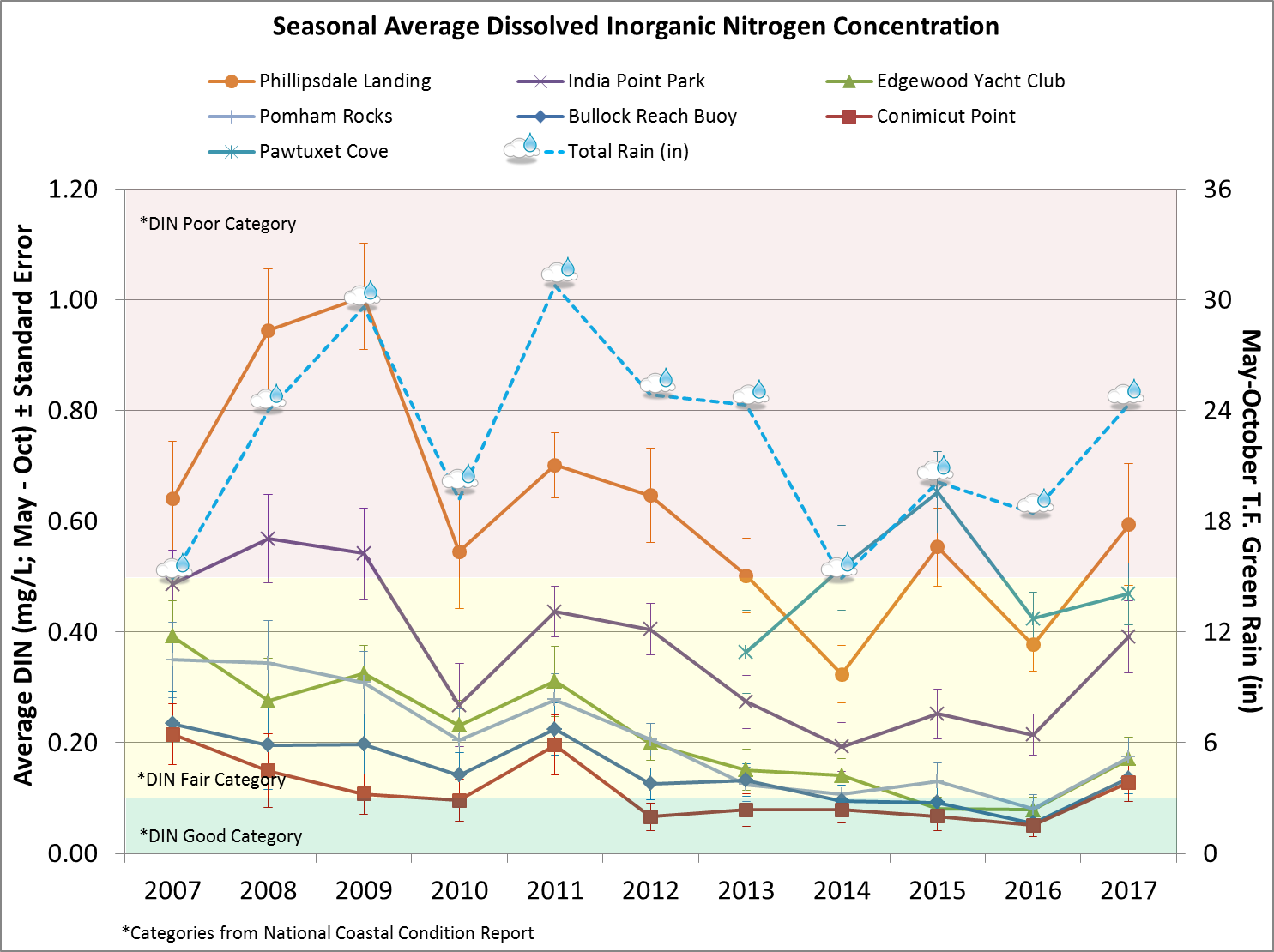 The NBC’s river and bay nutrients monitoring data are being used to study how WWTF nutrient reductions throughout the watershed are impacting nutrient concentrations and related water quality conditions in Narragansett Bay. In addition, the nutrients concentration data combined with USGS flow gauge data provides estimates of nutrient loadings from the major rivers into the estuary, providing greater detail on the relative magnitude of various nutrient sources to the Bay. This initiative is an essential element of the NBC’s environmental monitoring program, and the data have been used by many researchers and environmental groups to increase our understanding of the Narragansett Bay ecosystem.