The word plankton comes from a Greek word “planktos", meaning drifters. Plankton are organisms that drift with waves, currents, and tides in oceans, rivers, lakes, and ponds. Plankton can be plants, called phytoplankton, or animals, called zooplankton.

Phytoplankton are microscopic and range in size from about 2 µm to 2 mm.  Phytoplankton use sunlight and carbon dioxide to make food and produce oxygen in a process called photosynthesis.  In fact, half of the oxygen on planet earth is produced by phytoplankton! Just like plants on land, these tiny floating plants are the base of the food web. Without phytoplankton, everything from fish and whales to turtles and seabirds would have nothing to eat.  Here in Narragansett Bay, the phytoplankton community provides food for oysters, quahogs, and many juvenile fish. 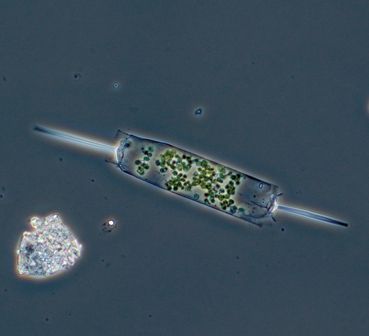 Above: A 200x micrograph of a phytoplankton species called Ditylum brightwellii. D. brightwellii is found in all global oceans and occurs periodically in Narragansett Bay. While the cell looks like a rectangle shape in this 2D image, it is actually a triangular prism.

Phytoplankton require nutrients such as nitrogen, phosphorus, and silica for growth. Recent facility upgrades at both NBC wastewater treatment facilities, Field's Point and Bucklin Point, have reduced nitrogen loadings to the upper Narragansett Bay by over 60% since 2014.  Monitoring the phytoplankton community provides valuable information regarding the effects of this nutrient decrease on the biotic community in Narragansett Bay. This dataset will assist managers and researchers in determining the effects of the wastewater treatment facility nutrient reductions in the Providence River estuary.

Samples are collected from the surface of the water at NBC's Bullock Reach fixed site near real-time water quality monitoring station.  This station monitors temperature, salinity, dissolved oxygen, pH, and chlorophyll a every 15 minutes during the spring, summer, and fall. Chlorophyll a is a pigment in phytoplankton cells and scientists measure it as a proxy for phytoplankton population size. Phytoplankton samples are collected every two weeks, in conjunction with the collection of nutrient samples and water quality profiles.

The NBC sampling procedure is based upon the methods utilized by the University of Rhode Island Graduate School of Oceanography (http://www.gso.uri.edu/phytoplankton/).  Two phytoplankton samples are collected on each of the sample days. The first sample is collected using a plankton net deployed at the surface for 30 minutes.  The plankton net is made of 20 micron mesh which captures the plankton floating at the surface and concentrates them in a sample bottle.  The other plankton sample is a whole water sample, also collected from the surface.

Back at the NBC laboratory, a sub-sample of the plankton net sample is analyzed qualitatively using 100-400x phase contrast microscopy. Viewing the concentrated sample ensures that less abundant species (less than 1000 cells/Liter) are recorded as seen not counted.  The whole water sample is analyzed quantitatively using a Sedge-wick Rafter counting chamber.  All phytoplankton cells >10 microns in size present in 1 mL of the whole water sample are counted at 100-200x phase contrast magnification.

Above: The phytoplankton net is deployed over the side of NBC's boat, R/V Monitor.

The NBC would like to thank the Rhode Island Bays, Rivers and Watersheds Coordination Team for their financial support to get this project running and Dr. Tatiana Rynearson and her lab at the University of Rhode Island Graduate School of Oceanography for their intellectual support of this project.