​On Wednesday, July 15th, the crew of the R/V Monitor was out on the upper Bay collecting nutrients samples, taking Secchi Disk water clarity measurements, conducting water column profiles using a profiler sonde, and conducting real-time surface mapping of water quality parameters, including dissolved oxygen, chlorophyll, water temperature, salinity, and pH, all in an effort to document water quality improvements associated with NBC construction projects.  Sara captained the boat while monitoring professionals Mike and Amanda collected the samples and data.  It was a cloudy day with a northeast wind. There was no chop on the water.  The photo below featuring sailors enjoying the day was taken at Edgewood Yacht Club. 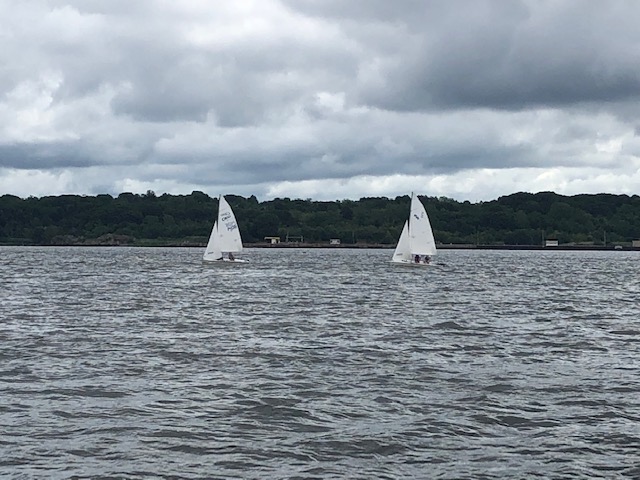 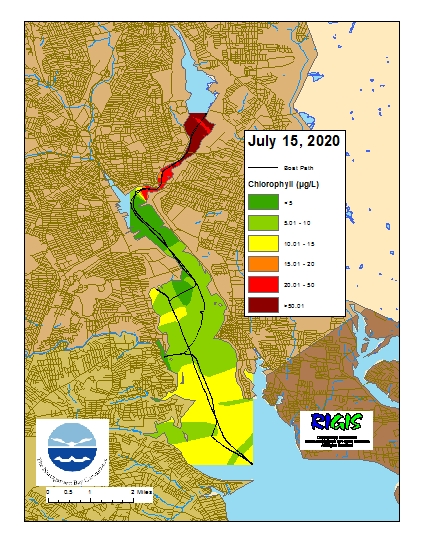 The geometric mean of fecal coliform results for all sites was 30 MPN/100 mL; counts were higher at the Seekonk River sites than the Providence River sites (geometric means of 153 MPN/100 mL and 14 MPN/100 mL, respectively). The maximum count (2,300 MPN/100 mL) was measured at Point St. Bridge. Results from the Providence River were within the state standards for primary contact, however, results from the Seekonk River exceeded these state standards. Results from both rivers exceeded state shellfishing criteria.

Please note: the results of NBC's fecal coliform and enterococci monitoring are for informational/research purposes only and are not intended to suggest official state compliance with bathing or shellfishing standards.
Week of July 5 – 11, 2020

​Water clarity was measured at six locations in the Providence and Seekonk Rivers on July 8, 2020. Conditions were relatively dry in the few days leading up to the survey, with only 0.03 inches of precipitation recorded on the day of sampling. Average Secchi depth increased by 0.08 m since the previous survey, from 1.69 m to 1.77 m. Bullock Reach was the only site that exhibited decreased clarity (-0.20 m) since the last survey. The greatest increase in clarity was observed at India Point Park, where clarity increased by 0.33 m, from 1.57 m to 1.90 m. India Point Park and Point Street Bridge had the greatest water clarity, at 1.90 m, while Phillipsdale Landing had the lowest water clarity, at 1.57 m. Water clarity was variable throughout the Bay, with no clear north-to-south gradient, but overall, water clarity demonstrated an improvement from the last survey.