Data were collected on September 2, 2020 while the R/V Monitor was underway collecting bacteria samples and performing vertical profiles in the Providence and Seekonk River estuaries. The chlorophyll concentrations were variable from poor to good in the areas surveyed with evidence of a north-south gradient. From north to south, average chlorophyll concentrations were as follows: Seekonk River (35.16 µg/L), Upper Providence River (34.65 µg/L), Edgewood Shoals area (21.17 µg/L), Pawtuxet River area (22.79 µg/L), and Lower Providence River area (13.87 µg/L). Overall, chlorophyll ranged between 3.10 µg/L and 187.50 µg/L with an overall average of 27.18 µg/L.  The chlorophyll data from this date are presented in the map below: 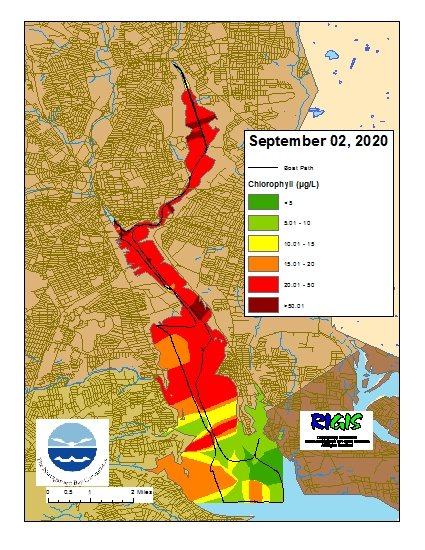 ​Water clarity was measured at eight locations in the Providence and Seekonk Rivers on August 19, 2020. The weather leading up to the survey date was moderately wet, with 0.5 inches of rainfall recorded over the three days prior to sampling. Secchi depth increased at all sites compared to the previous survey, with an overall average of 1.95 m compared to 0.94 the week before. The greatest clarity, and greatest increase from the prior week was observed at Conimicut Point, where the Secchi depth of 3.70 m was substantially higher than 1.47 m measured on August 13. The lowest clarity overall was measured at Phillipsdale Landing at 1.10 m. A general gradient in increasing clarity from north to south was observed among sites this week.​

​Water clarity was measured at eight locations in the Providence and Seekonk Rivers on August 13, 2020. The weather leading up to the survey date was dry, with just 0.01 inches of rainfall recorded the day before sampling and no rainfall over the four days prior to that. Average Secchi depth decreased by 0.46 m compared to the previous week, from 1.40 m to 0.94 m. All individual sites that were surveyed the previous week exhibited a decrease in clarity, the greatest of which was observed at Bullock Reach; clarity at this site declined from 1.90 m on August 5 to 0.77 m on August 13. The lowest clarity overall was measured at Edgewood Yacht Club at 0.30 m; the greatest clarity was observed at Conimicut Point at 1.47 m. There was no apparent gradient in clarity from north to south this week.​

​Water clarity was measured at seven locations in the Providence and Seekonk Rivers on August 5, 2020. A total of 0.25 inches of precipitation was recorded over five days prior to the survey, with the majority (0.19 inches) recorded on August 4. Average Secchi depth decreased by 0.30 m since the last survey (July 22), from 1.70 m to 1.40 m. The greatest decrease in water clarity was observed at Phillipsdale Landing, which decreased from 1.97 m to 0.70 m; this was the lowest clarity measured this week. Water clarity also exhibited decreases at Point St. Bridge, Edgewood Yacht Club, and Pomham Rocks. Water clarity increased at Bullock Reach (+0.27 m) and Conimicut Point (+0.20 m); Secchi depth was greatest at these two sites, at 1.90 m. A gradient of increasing water clarity among sites from north to south was apparent.​

Twenty stations were sampled for fecal coliform bacteria in the Providence and Seekonk Rivers on August 5, 2020; five of these stations were also sampled for enterococci. In the five days prior to sampling, 0.25 inches of rainfall was recorded, with the majority (0.19 inches) falling the day before sampling; bacteria counts were elevated compared to the previous sampling date.

The geometric mean of fecal coliform results for all sites was 110 MPN/100 mL; counts were higher at the Seekonk River sites than the Providence River sites (geometric means of 946 MPN/100 mL and 41 MPN/100 mL, respectively). The maximum count (110,000 MPN/100 mL) was measured at Point St. Bridge. Fecal coliform results in both rivers exceeded state standards for primary contact and shellfishing.
The enterococci results increased slightly from the previous sampling event, from an overall geomean of 14 MPN/100 mL to 23 MPN/100 mL. This increase was due to an elevated count at a single site, 1467 MPN/100 mL at Point St. Bridge. Enterococci results were lower at the remaining sites, ranging from <10 MPN/100 mL to 20 MPN/100 mL. As with fecal coliform, enterococci results exceeded primary contact standards.
Please note: the results of NBC's fecal coliform and enterococci monitoring are for informational/research purposes only and are not intended to suggest official state compliance with bathing or shellfishing standards.