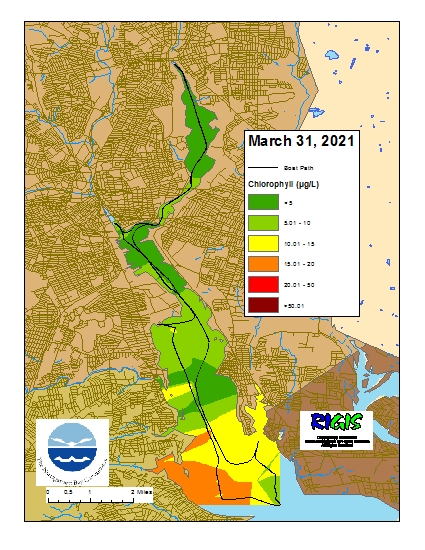 ​Phytoplankton samples were collected on March 23, 2021 at Bullock's Reach and analyzed in the laboratory shortly after collection.  It was a cool, partly sunny day on Narragansett Bay with calm conditions. Sondes data revealed the surface water temperature was 9.24oC, salinity was 18.61 psu, and chlorophyll a was 9.2 ug/L. The plankton tow net sample was filterable with a 20 micron mesh. The filtrate was a light tan color and had a quick filter time. The tow net sample was analyzed qualitatively for microorganisms using 100x phase contrast microscopy. The whole water sample was analyzed quantitatively under 200x phase contrast microscopy. A Hensen Stempel pipette was used to accurately deliver 1ml of sample to a Sedge-wick Rafter chamber. This analysis revealed a total of 948,000 cells per Liter. The flagellates were found at 70,000 cells/L. The most predominant phytoplankton was Thalassiosira spp. at 586,000 cells/L. Representative genera include Skeletonema spp., Chaetoceros spp., and Thalassionema spp. 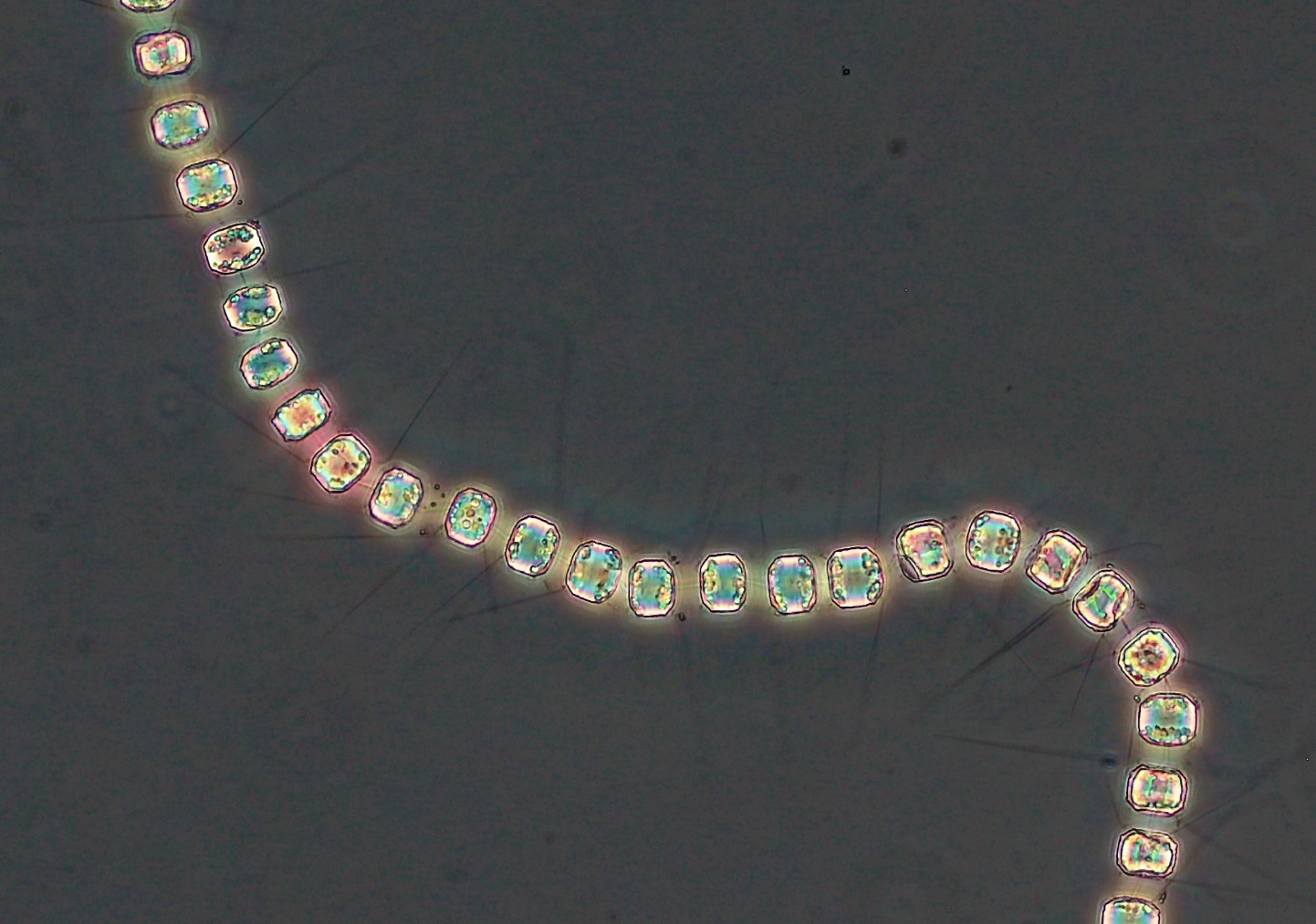 Water column profiles were measured at six locations in the Providence and Seekonk Rivers using the Seabird profiling instrument on December 2, 2020. Heavy rainfall occurred in the region over two days prior to the survey, with 2.74 inches recorded at TF Green on November 30, and 0.71 inches on December 1. Low-salinity surface waters were present at all sites, contributing to some minor stratification.
Water column salinity was lowest at Pawtuxet Cove, ranging from 3.5 psu at the surface to 26 psu at the bottom. Salinities were highest at Bullock Reach and Conimicut Point, ranging from 21-22 psu at the surface to 28-29 psu at the bottom. Surface temperatures ranged from 9°C at Pomham Rocks to 11°C at Bullock Reach. Temperatures in bottom waters ranged from 10.4 to 10.8°C at all sites. The warmest waters this week were actually sub-surface at Pomham Rocks, reaching 11.1°C at around 2-m depth.
Dissolved oxygen (DO) ranged from a minimum of 7.7 mg/L below the pycnocline at Pawtuxet Cove to 10.2 mg/L in surface waters at India Point Park. Hypoxic conditions (e.g., DO concentrations <2.9 mg/L) were not observed at any of the sites. Please note that due to a quality control issue, numerical fluorescence data are not posted at this time.
Week of March 21 - 27, 2021

​On Wednesday, March 24th, the crew of the R/V Monitor was out on the upper Bay collecting nutrients and plankton samples, taking Secchi Disk and Par sensor water clarity measurements, conducting water column profiles using the Seabird instrument, and conducting real-time surface mapping of water quality parameters, including dissolved oxygen, chlorophyll, water temperature, salinity, and pH, all in an effort to document water quality improvements associated with NBC construction projects.  Jeff captained the boat while monitoring professionals Sara and Mike collected the samples and data.  It was a cool partly sunny day with little to no wind and calm waters. The featured photo is of a US Coast Guard helicopter flying overhead this day. They were searching for a sunken vessel. 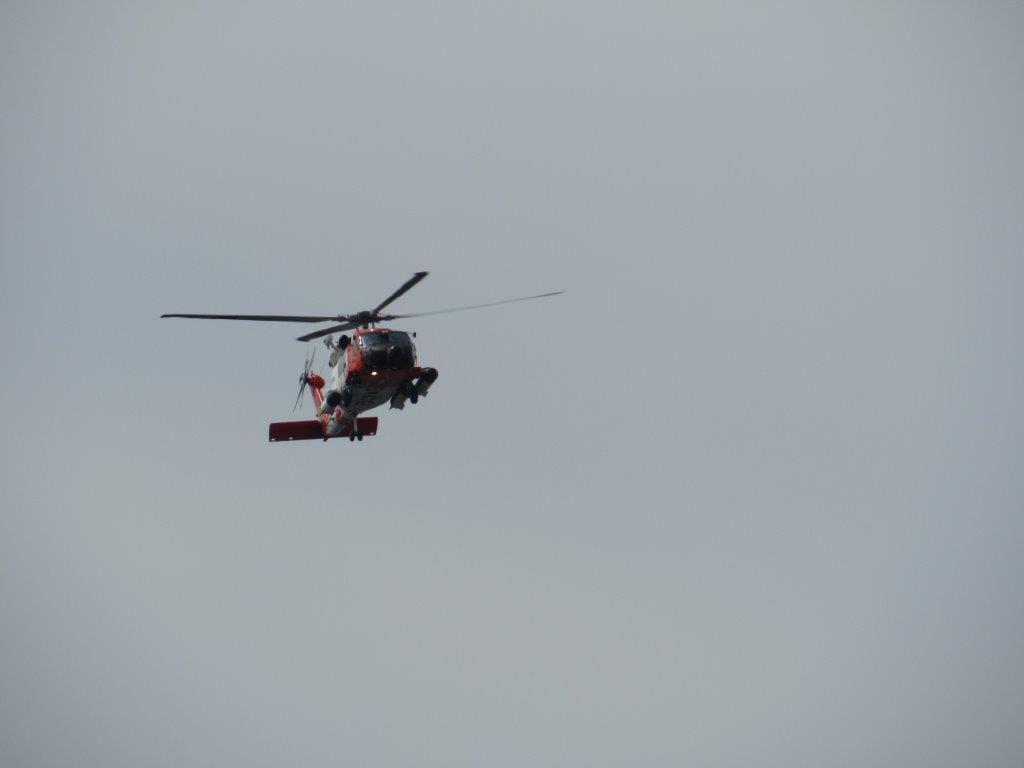 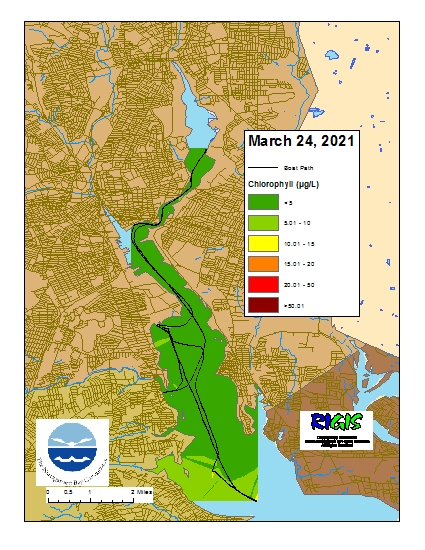